GTA V Will Receive an Online Casino in July gamesmojo.com
0%

GTA V Will Receive an Online Casino in July 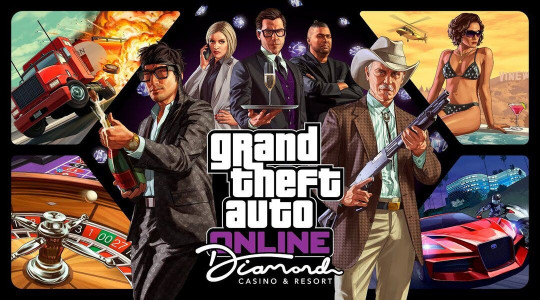 While Rockstar is enjoying the success of Red Dead Redemption II, its greatest hit of all times – GTA V – isn’t abandoned. The long-awaited online casino will be released soon, but not as soon as some might wish. So far it’s planned to be rolled out in mid-July. It’s probably being debugged at the moment, and that’s why it hasn’t been released in June (as some fans hoped in vain).

Since GTA Online was introduced, it’s one of the most expected DLCs in its universe. Some go further and call it the most expected one in the entire industry in 2019. Little is known so far about the contents of the casino update, but it will work online, it will operate with the in-game currencies, and it will certainly contain multiple gambling options, with games and bets quite diverse.
As for new missions and stories, there may be some, but they are completely unnecessary. The casino is for PvP interactions, isn’t it? In addition to games, it will offer drinks, parking, various types of service, and, of course, prizes we already wonder about.

Look: if Rockstar introduces Battle Royale mode in GTA Online, and Casino is a location, would it turn the spot to Casino Royale? A joke, of course. The name is Diamond Casino & Resort, and it will be located between Tataviam Mountains and Vinewood Hills.

Some Are More Equal

As for platforms the update will hit, they will probably be PS4 and Xbox One platforms; as for PC compatibility, it would be logical, but we know that Rockstar manner to make PC owners wait. Well, that’s the most expected sort of velvet rope (hope not).