Nintendo at E3 2018: above and beyond gamers expectations - Games Mojo Blog
0%

Nintendo at E3 2018: above and beyond gamers expectations 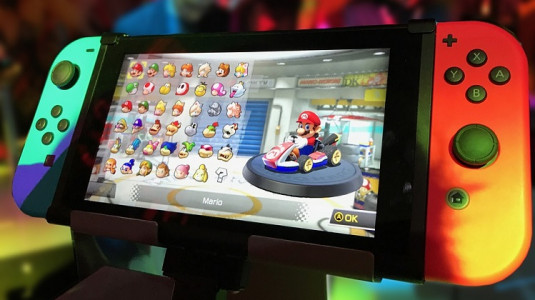 On E3 2018, Nintendo traditionally held its conference exclusively online. With the live stream from Los-Angeles named Nintendo Direct, the company has announced plenty of games for the Switch. A number of important, long-awaited announcements made the presentation a real gift for the fans of the console.

(Let us remind you, that Nintendo Switch is considered to be the fastest-selling game console in history in many regions for the first year of sales.)

Within the presentation, Nintendo showed Super Smash Bros. Ultimate and even announced the release date. The central part of the presentation was dedicated to this novelty. Therefore, the announcements of other long-awaited video games were not as detailed as we would like. But don’t worry, we have the joyful news. The majority of these video games can be expected by the end of 2018.

Nintendo Direct started with the announcement of a brand new title. The colorful action Daemon X Machina developing by Marvelous Games is scheduled for 2019 exclusively for Nintendo Switch. In this game, the players are offered to take control of the robot to fight against various opponents. An array of missions, multiple weapons and abilities for your hero, and exciting gameplay have already made Daemon X Machina an appealing target for the Switch fans.

After a small trailer, Nintendo shed light on Pokemon Let's Go. As the fans expected, the game will give players an opportunity to transfer the captured Pokemon from the mobile application Pokemon Go. The battles between players will be supported on the same console. The release date is scheduled for November 16, 2018.

Did you buy Nintendo Switch with the intention to play in a company? And you are a dedicated fan of the Mario franchise? Rejoice! The Super Mario Party was announced exclusively on the console. Players, as before, will have to compete in a virtual board game, which will throw up various mini-games from time to time. In some of them, you can play on two screens with a second set-top box.

So, the project received new strategic elements, as well as new game modes, including mini-games with Joy-Con controllers or the ability to combine two Nintendo Switches for a four-player game. Super Mario Party is meant to be the perfect game for 2-4 players. And we advise you to prepare for the Super Mario home party in a company of friends on October 5, 2018.

There can’t be much good JRPG. That’s why Nintendo doesn't stop evolving in this popular genre. Xenoblade Chronicles 2, the role-playing action from 2017 gets a fresh addition which is called Torna - The Golden Country. The trailer didn’t reveal all the changes it will bring with itself, but the game looks very decent and attractive. Xenoblade Chronicles 2 with the Torna - The Golden Country addition will be available starting September 21, 2018.

Fortnite is finally confirmed for the Switch! Nowadays it is one of the most popular games in the world with 40 million players on PC, Xbox One, PlayStation 4 and mobiles. For a long time, the most favored Nintendo console wasn’t taken into account by Fortnite developers. And now you can easily get it from the Nintendo eShop and enjoy playing on the favorite console.

Nintendo shed light on the long-awaited Super Smash Bros. Ultimate, in which all the characters from each part of the series will emerge. The game is a battle between the heroes of the popular series, which try to push each other off the arena and win. The standard one-on-one battles and battles between the four characters are going to be supplemented with eight players fights.

New arenas and characters, and returning ones from the previous parts, improved graphics, and other interesting features will be available with the release of Super Smash Bros. Ultimate expected on December 7, 2018.

Dragon Ball FighterZ, based on the eponymous anime series, will be released on the Nintendo Switch. It is worth noting that in January of this year the game was released on PC, PlayStation 4 and Xbox One, and gained positive reviews from the critics. Later this year that celebrated anime fighting game is going to make its way to the Switch. The Nintendo fans anticipate this title eagerly because it is already known for its fantastic art style intense action. With the Switch version, the game fans will get an ability to play Dragon Ball FighterZ on the go.

Nintendo presented one more fighting game with the impossibly long name SNK HEROINES Tag Team Frenzy - Knockout Duo! Luong & Mian! Here you will meet deadly Luong and mysterious Mian who are the strongest female fighters in SNK. In the brand new 2 VS 2 fighting game with unique KO mechanic, you are going to test them for strength. The release date is September 7, 2018.

Fire Emblem Three Houses is another game of the Fire Emblem series with new characters. It’s a step-by-step tactical RPG with elements of strategy. In the trailer presented at E3 several new elements of the gameplay were demonstrated. The continuation of the series remains faithful to the basic mechanics of gameplay.

In Fire Emblem Three Houses, the players will explore a fully detailed 3D world, instead of isometric-styled locations from older versions. The release is expected in the spring of 2019.

Killer Queen Black is a multiplayer platformer for eight players, which also allows a single passage. You can divide into two teams of players consisting of four people to take part in the multiplayer battles of bees. The list of tasks is quite extensive - except for battles with opponents, you can saddle snails, get berries and, of course, kill enemy bee queens. The vintage visual performance will astonish you with its bright coloring. The release of Killer Queen Black is expected in winter.

Nintendo presented eight travelers and eight adventures from Square Enix in the world of Orsterra on E3 2018. This is the Octopath Traveler game. You can get its first chapter as a free demo in Nintendo eShop, after which the result can be transferred to the full version of the game. You will be able to assemble your company and go on an adventure that depends entirely on the player's decisions. With all non-player characters, you can interact with Path Action. This project for JRPG fans will appear on the Nintendo Switch platform on July 13, 2018.

Hollow Knight from the studio Cherry Games offers players to go on an adventure through the vast ruins of a forgotten kingdom that was buried underground. This game is drawn in the 2D-style. In the ruined kingdom you will find insects and brave heroes who are not afraid to explore dark dungeons and meet unexpected characters. The release is announced in the current summer.

As a part of the presentation, Nintendo and Team 17 announced the release of Overcooked 2. In this new game, players will discover more recipes, kitchens, and madness in the Onion Kingdom. Developers promise to include more different recipes, new levels, new characters and, of course, extreme situations in the chef's simulator. Due to the capabilities of the Nintendo Switch, players can play together both in the online mode and local. The release date is near at hand: August 7, 2018.

Throughout Nintendo Direct presentation the fans had once more convinced that the company listens to their wishes. The new titles and the additions to the most favorite games are going to elevate the Nintendo Switch playing experience for sure.