Stepping Upon Its Own Brick: Why Lego Is Losing At Video Games - Games Mojo Blog
0%

Stepping Upon Its Own Brick: Why Lego Is Losing At Video Games 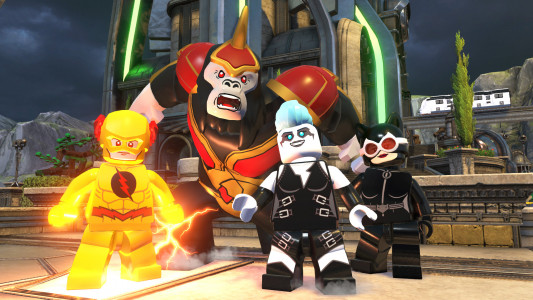 The importance of LEGO is hard to overrate when it comes to video games. Without Lego success, chances are many of today’s constructing games just wouldn’t ever appear. And it’s hard to count all the physical puzzles and building simulators that have experienced LEGO influence.

Lately the Danish company has proven that it deals with movies okay too, building it brick by brick to quite a successful level. LEGO Movie 2 is on these days, not as triumphant as the predecessor, but sure to pay off well. Batman spinoff was quite good, and Ninjago decent.

It seemed that the brand so influential and popular would have made it to video gaming industry with no effort. But it wasn’t a red-carpeted road at all. It took LEGO 10 years to reach first real success, through minor hits and huge misses. Its first video games were released back in 1995, and its first huge success on this market was in 2005. But now it seems not LEGO’s day in video gaming, as sales decrease dramatically. Compared to what it was like ten years before, the decline is terrifying.

There’s just one word to the wise: the sales of LEGO games for Xbox 360 still exceed the overall sales for PS4, Xbox One, and Nintendo Switch. New generation consoles feel fine without LEGO legacy. There is more to illustrate, but there’s nothing to disproof the tendency.

So, Mr. Teacher, how did LEGO slide down there? Okay, kids, let’s see where are we now and use deduction to learn how it happened.

It’s worth to mention three checkpoints: first, the moment when LEGO entered the world of video gaming, second, the moment it finally succeeded, and, third, the moment the failure became obvious.

It was in 1995 when LEGO released its LEGO Fun to Build for SEGA Pico. These three words were the essence of the company’s message to the world, and the game featured building puzzles and real brick sets. LEGO Island for Windows started a series of games that had varying success in PC versions and down to none in console versions.

In 2005 Lego Star Wars: The Video Game was released. In fact, it was developed by Traveller’s Tales, a British studio that has made most LEGO-branded games since. It was a success LEGO had never had before with video games. Partly it was because the game was the first decent release for consoles, for all three GameCube, PlayStation 2, and Xbox. Just at the time the console mania was at its highest, and it was a real hit. The number of copies sold exceeds 7 million by now. And the overall sales of LEGO games were over 100 million. 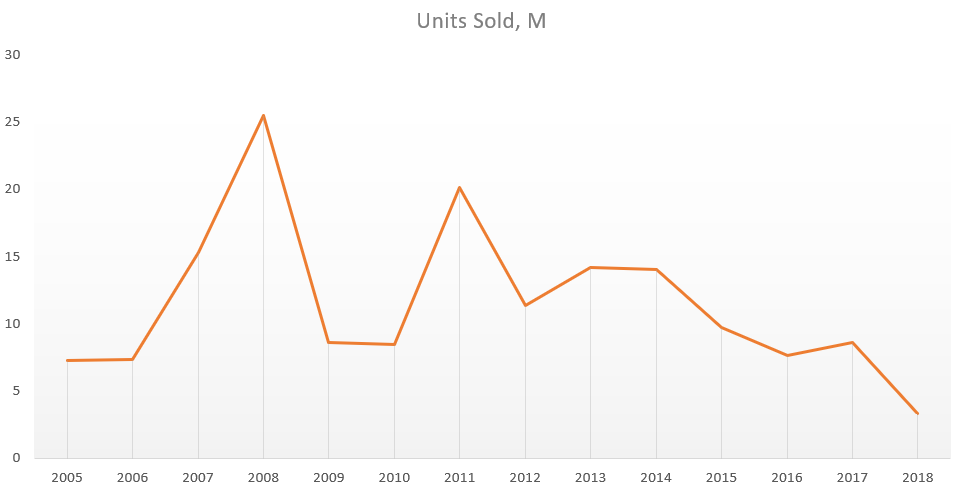 When just released, the game seemed very original. First, it was as LEGO as could be; the characters were made of digital LEGO bricks and fell apart when defeated, and the familiar environments from the movies were made of LEGO too. It was six years before the Minecraft. Second, the characters had their unique abilities (The Force, lightsabers, paranormal strength, fitting abilities, interaction with hardware), so they didn’t look like random fighters cosplaying Star Wars characters. Their behavior was organic and fit their appearance. So, it was really a Star Wars game and really a LEGO game.

Then the alliance released two more Star Wars games; let’s not forget that it was just the time when the prequel trilogy attracted most interest. The same story was with Indiana Jones: The Original Adventures, released right after The Kingdom of the Crystal Skull hit the theaters. It looks more like modus operandi than like a pure coincidence; LEGO Batman: The Videogame was released just months after The Dark Knight. Of course, all the characters and trademarks were licensed, and release dates were coordinated as well as promo campaigns. Maybe that explains the 2008 peak we observe on the chart, with well-planned promo and still fresh core.

Though many years passed, the games of 2005-2008 remain the most successful in LEGO history.

But the success did its job: the modus operandi was formed, and from then on the designers only changed skins for new games. Marvel and DC characters, Pirates of the Caribbean and Harry Potter worlds became just battlefields for combat-based local multiplayer. The scheme worked for some time, but nothing lasts forever.The Top 3 games, as we see, received great promotion, bringing quite fresh experience for that time. And, as we see below, no other game release coincided with release of the movie that inspired it, or at least its sequel. Maybe that’s the explanation for lower sales, with no umbrella hype to cover all the products with the promoted name.

The peak of 2008 was followed by varying success until 2014, and then by decline that still continues. LEGO games don’t sell as well as they used to, though nothing changed in production. And that may be the reason. The scheme of local multiplayer with selectable characters from the featured universe became too much of a routine.

It’s hard to blame LEGO managers for that; at that very time LEGO Universe, a planned MMO hit, was going through production hell. It was launched two years later than planned, in 2010, failed to attract enough users and was shut down, causing $50 million loss. Unlike that, the Star Wars scheme did work, and after repeated hits it seemed an immortal cow to milk.

When it comes to quickly changing industry like modern gaming, the idea of local two-player combat as the core of the gameplay, though as eternal as mankind itself, needed to evolve to keep the audience interested. Obviously that’s what the LEGO and Traveller’s Tales alliance missed, but it was noticed by the audience. Comments under each new review contained at least some reminder that “it’s all the same again”.

So it’s clear that LEGO relies more on the well-known franchises than tries to invent something unique. It’s illogical for the company that welcomes inventiveness with its major product. Why not provide an example?

Or maybe the company should have made another game, based on Through the Looking Glass, just to run into Red Queen’s quote: “It takes all the running you can do, to keep in the same place”. Traveller’s Tales is a British company, so they should have read Lewis Carroll and apply this wise observation to the world of today.

So, let’s see the trends. What’s been hot in 2018? Maybe that’s the clue? If we analyze the Amazon Top of 2018, we’ll see that gaming world has separated itself from outer influence and established itself as self-sufficient industry. It doesn’t mean gaming industry stopped import characters and worlds from books, movies, and cartoons; but it invents its own as well.

It’s symbolic that two of Top 5 Amazon games feature Mario, the first character to make his way from games to the movie. Not successful itself, this movie became a precedent, followed by Mortal Kombat, Tomb Raider, Warcraft, and, sorry, Uwe Boll’s works. Only the fifth position is occupied by Spider-Man, the character originated in Marvel comic books. And down there we see Mario again, The Legend of Zelda, Pokémon, Dragon Quest, Assassin’s Creed, Minecraft… All titles are original.

Was it so only in 2018? History teaches. If we go backwards down to 2000, we’ll probably see the same situation. It was one, rarely two titles based on movies or comic books that made it to Top 10: Harry Potter in 2001, Spider-Man in 2002 and 2004, Enter the Matrix in 2003, two Star Wars titles in 2005, and then all original titles until 2008, with LEGO breaking in. And all of them were quite original, not just image exploitation on the same mechanics.

What do these figures tell you? They tell us that just borrowing familiar stories and characters is no granted way to succeed, especially if you don’t create a story where they would fit.

It’s no comme il faut to compare like that, but LEGO looks like a cuckoo trying to lay its eggs into any successful franchise’s nest. Since 2004 LEGO has taken on Star Wars, Indiana Jones, Pirates of the Caribbean, Hobbit/Lord of the Rings, Marvel and DC universes, and only Lego Movie 2 seems something really original. So it forms the image of LEGO games as straightforward followers. It’s not so far from The Asylum with their mockbusters, but The Asylum is reported to never lose money on their movies.

But exploiting a cult franchise isn’t that bad if you make a decent game upon it. Say, the aforementioned Marvel’s Spider-Man is a great game, with a unique fight system, great graphics and wonderful immersion. That’s what you can find in none of LEGO’s latest games.

By 2014 fans have made sure that LEGO offers them the same mechanics over and over, only changing the character’s appearance. Simple action games with almost no place for creativity are like telling an old political anecdote with Hitler replaced with Kim Jong Un, while the latter provides reasons for lots of original anecdotes.

Maybe it’s just one of LEGO games problems, but what they shouldn’t have given up is creativity. Create and let create; that’s the motto.

It can be confirmed by success of LEGO Dimensions, a toys-to-life game with a connectable gamepad and mini figures. Quite successful, it didn’t receive enough support. Maybe that was a reminiscence of the failure LEGO had with introducing motorized sets. Lego City Undercover is a LEGOlized take on GTA esthetics, quite amusing, but lacking more irony that would make this project some kind of camp. Alas, they are too individual to be made out of bricks.

If LEGO bosses look back at 2011, the year of Minecraft, and then turn their heads back to 2018, the year of Fortnite, they may acknowledge the power of a simple motto: Let’em build! Building is cool! Building Wow! Anyway, that’s what LEGO empire is drawn upon.

The Lego Movie Videogame 2 seems to encounter these ideas. Now characters can build as well, according to the preview videos we see on YouTube. Not that this addition is a literal game-changer, but it can be a figurative one. Anyway, when we hear “LEGO”, subconsciously it relates to “building”.

Some more games are planned for the next years, but we can only speculate on them until they’re officially announced. They include Toy Story trilogy interpretation, and (as we expect) new DC and Marvel-based series. And, frankly speaking, it would hurt to see the developers step on the same brick again. Is Lego/TT alliance a two-trick pony? It has demonstrated one of its tricks before. Now it’s time for another one.

Maybe (we really hope so), someday LEGO developers recollect what their whole project is for. Not for just earning money by making the same bricks, but for letting people create. And if they want to get somewhere else, they must run at least twice as fast as that!