How many things have happened in the world of video games since 1990? Tens of console generations were released. Many of them are considered to be antiques, but players all over the world still struggle to preserve the legacy of the past. Now, 29 years after, it is still possible to play them officially. Just go to your local game store and buy a cheap SNES Mini with HDMI output. 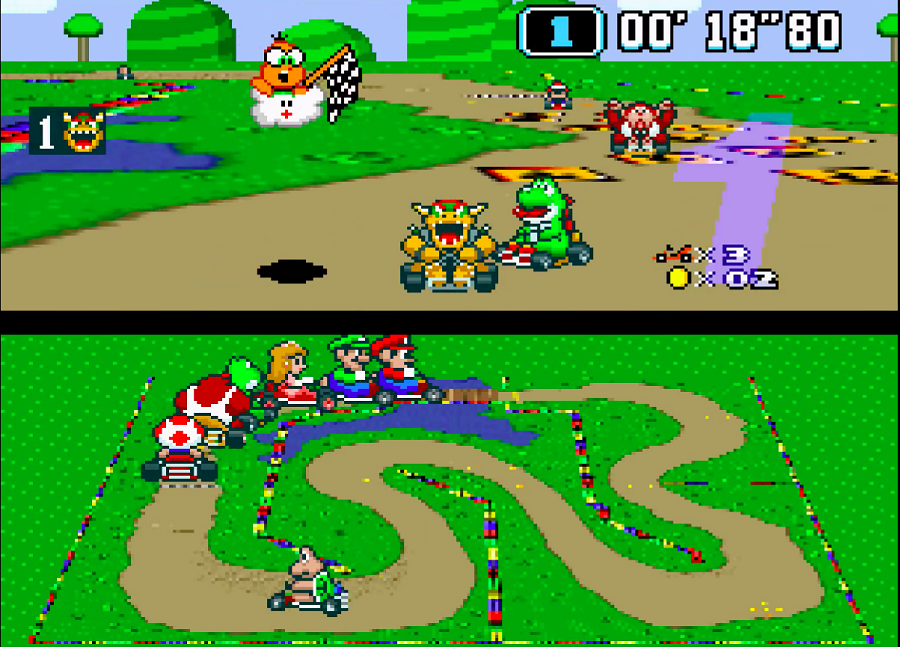 Super Mario Kart, which was released in 1992, is one of this console’s treasures. It is quite a simple game that managed to predetermine many features of modern racing simulators. Let’s take a closer look at its features.

Nintendo used the physical abilities of SNES Mode-7 to the full and managed to create a persuasive 3D racing simulator. Those times, the idea of porting Super Mario Bros. character to the crazy kart racing 3D game sounded weird. Fortunately, guys from Nintendo were not afraid of difficulties. As a result, the audience received an entirely new variation of an arcade racing game. 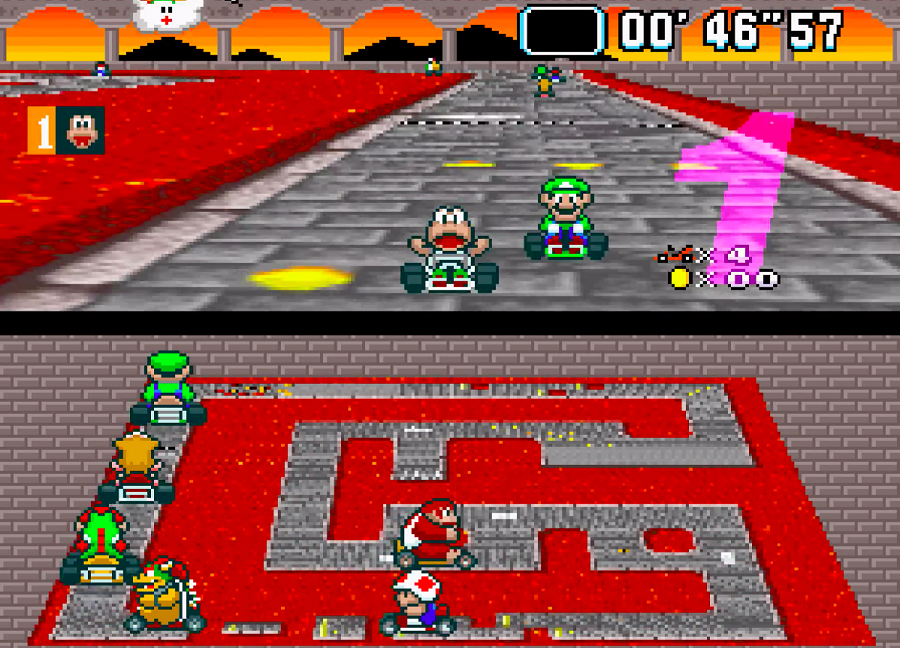 The recognizable style of Super Mario remained and allowed the developers to implement many brave ideas. The significant feature is the ability to use multiple weapons against rivals. You can just ride into blocks with a question mark to get a random weapon. The rational logic of these loot-boxes won’t let you get useful items too often. It means that you can’t use anything to slow down other racers if you’re on a leading position. Use your skill and patience to keep the high score.

Nintendo ported 8 characters from Mario Bros and endowed them with different physical properties, such as handling, acceleration, top speed, and weight. The easiest way is to play for Mario and Luigi as they have fast karts and responsive controls due to their low weight. The next couple is Yoshi and Princess who are a bit faster than the brothers but do not have such responsive handling. 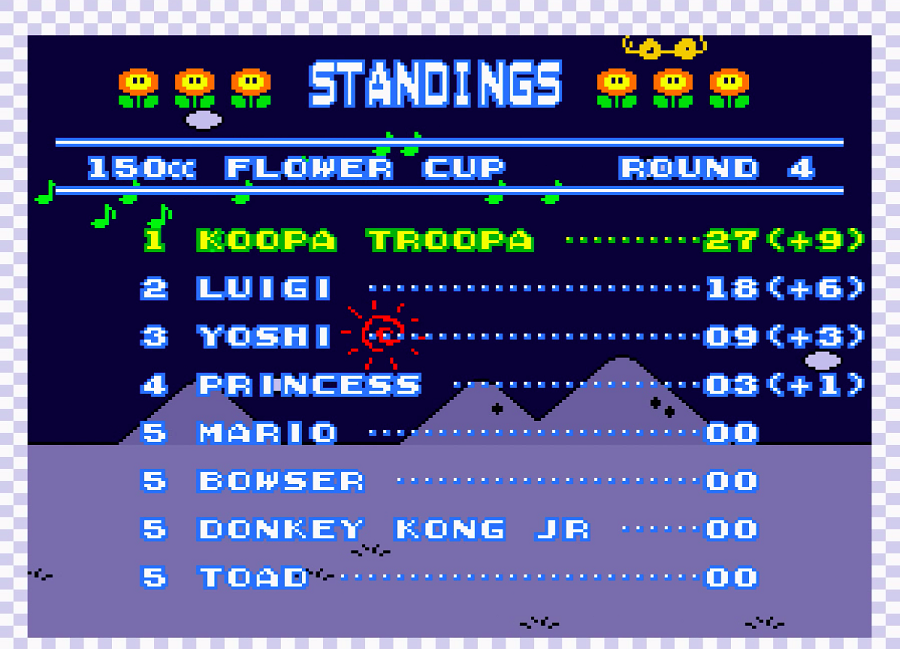 Huge Bowser and Donkey Kong Jr. require good driving skills because they have very slow acceleration along with the highest top speed. They are vulnerable to bananas and slow-down shells. The last two are Koopa Troopa and Toad with amazingly well-controlled karts. Their weakest and strongest side is their weight. That’s why more massive characters can easily push them out of the race.

The diversity of racing tracks is astonishing. The developers ported styles of locations from Super Mario World with precise attention to detail, so you can easily recognize Bowser’s Castle, Donut Plains, and other places. You can train your racing skills on each of the tracks and save your best time to compete with ghost riders that can repeat your previous actions.

There are 3 stages of difficulty in Super Mario Kart that are called cups. A 50cc cup is an uncomplicated arcade with low chances to lose and slow karts. 100cc gets a bit tougher and brings more unpredictable circumstances. A 150cc cup is an unlockable option that is extremely fast and furiously hardcore. 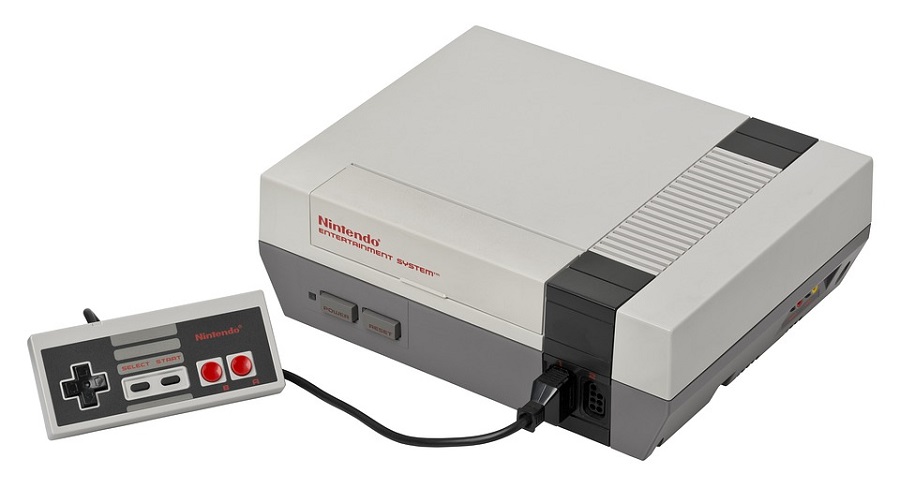 SMC provides single player and multiplayer modes. Both of them are played in split screen as you need a rear view mirror to play alone as well as you need a map with players’ positions to play with a friend. It’s advisable to play with classic SNES or Famicom controllers because other options don’t provide the authentic experience. 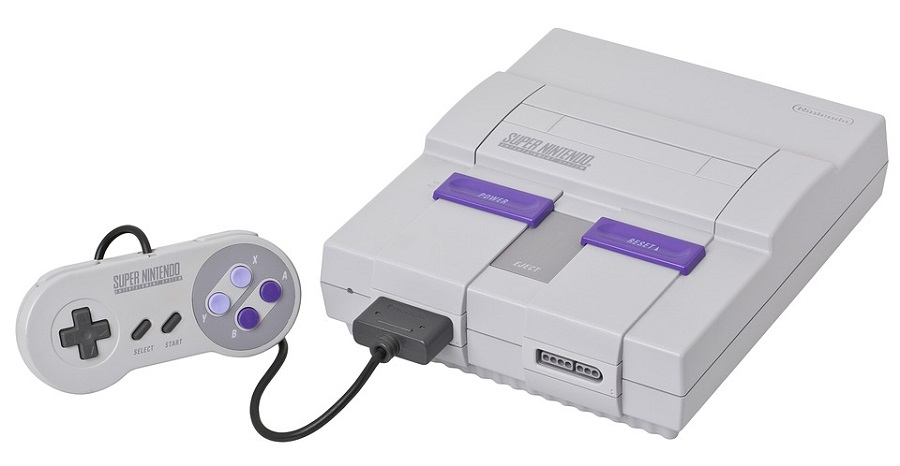 Super Mario Kart looks very old, but it does not radically differ from modern arcade racing games because it invented them! That’s why this game is an obligatory purchase for all retro fans. This bright retro experience is now available for a wide range of platforms due to the variety of emulators and reissues of old gaming consoles, such as NES Mini and SNES Mini.

Are you a retro gaming enthusiast? Then check out Arcade Attack, a great spot with retro reviews and gaming news! Head over and read their latest article about Shadow of the Colossus.