TOP-7 Western Video Games of All Times: From Classics to Modern Titles 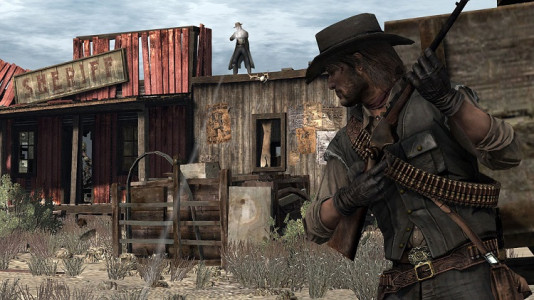 A rare video games genre - western - has not many fans, as other kinds of games do. Nevertheless, its adherents are devoted and consistent in their choice. The WIld WIld West aesthetics, horse-riding, new deserted territories exploring, and of course, plenty of shootings and fightings are the characteristic features of western games. Such specific plot-forming aspects genuinely describe the real spirit of the epoch. Let’s fully enjoy all of them and find own fascination in this underappreciated, but still exciting genre.

Call of Juarez: Bound in Blood

Cowboys astride horses, Indians in prairies, and busty women in saloons. All that you expected to see in the western game is right here in Call of Juarez: Bound in Blood. In this game, you will find no unnecessary twisting and pathos. Just an elegantly performed Wild West aesthetics.

Call of Juarez: Bound in Blood is one of the four games in this series, and probably the most successful one. The fans highly estimate its shooting mechanics and the genuine feel of Wild West.

The plot is focused on two brothers Ray and Thomas McCall. You can choose one of them to play for, noting that Ray resists damage much easier and no misters in dealing with dynamite. Thomas is nimble, managing knives and arrows well. The other featuring characters are cunning Mexicans, vindictive boss, native tribes, and an obligatory girl. Aiming and shooting enemies becomes a terrific option with a slo-mo mode.

Back to the Future Part III (video game)

The eponymous movie-based game refers us to the Doc Brown’s and Marty McFly’s adventures on the Wild West. As at the third part of the film, the characters are going to struggle the same challenges. So for all the movie fans diving into a familiar atmosphere with favorite heroes is going to be a breath-taking experience.

The first thing we have to mention, that the game is slightly vintage. It was released in 1991 soon after the Back to the Future Part III came out on the screen. There would be four missions to complete such as Rescue Clara, Target Shoot, Marty VS Buford’s Men, and The Train. If you watched the movie at least once, then you will surely understand the point of each of them. In most of the cases, you will have to control just Marty, and sometimes Doc Brown as well. You will have to jump along the roofs of the train, shoot the gun, and fight badass guys. As in the good old western indeed.

So if you still have Sega Genesis, then maybe it’s the best opportunity to take it out from the pantry and refresh your childhood memories diving into this retro cinematographic adventure.

Welcome to the open-world western environment created and released in 2005. At one time it was considered one of the greatest in its genre, and nowadays it is undeservedly forgotten. We still admire Gun’s well-designed open world, colorful selection of characters, and an opportunity to play in a multiplayer mode.

You are going to control Colton White, the protagonist, from a third-person perspective. He is mad at his destiny due to past events and trusts only his gun. The GUN in its variety of Colts, shotguns, Gatling guns, burning arrows, axes, dynamite can be named a full-right character of the game, as Colton won’t ever part these items. Our hero’s mission is to punish all bastards who ruined his life. So this western shooter is going to be full of brutal realism and cruelty. Prepare to use guns, knives, and dynamite to destroy your enemies.

During the gameplay you’ll find some additional features, distinguishing Gun from other westerns. These are poker parties, buffalo hunting, pieces of training on stealth tactics and using the explosives. With taking part in side missions, you will soon become an expert in throwing weapons and horse riding.

Oddworld: Stranger’s Wrath can’t be named a traditional western game, though its action takes place in the Wild West-like environment. An odd virtual world opens in front of the main character, a bounty hunter who is called the Stranger. Common for the 19th-century occupation - to hunt for criminals and outlaws for the reward - will be the main purpose of his adventures.

Travel along prairies and towns to find your enemies. Catch them dead or alive. Get your bounty for the captured. And this is the full list of the actions available to perform by the Stranger. Nevertheless, the gameplay is intriguing.

The characters you need to ask are human-like odd creatures. You can set traps for them or even fire them from a distance. The excitement of a stealth game is guaranteed.

With stunning graphics (especially in the HD-remastered version that was released in 2010), a pinch of good humor, and high attention to the details from developers, this unusual western game deserves your undiverted attention.

When the Samurai meets the Cowboy - it could be the motto for this game. As per the game plot, you will be performing a samurai named Gojiro Kiryu who comes to the Wild West searching for his brother Rando. Gojiro’s intention - to kill the brother as he betrayed Code of the samurai.

Masterly combining mysterious East and old American West, developers find a perfect golden mean between them. Basically, it lies in the implantation of Eastern martial arts in the uncommon environment. Gojiro is going to use various swords in order to underline his Japanese origin. There are high-stance swords that beat your opponents entirely; low-stance swords for deflecting bullets; super-powerful swords due to attack abilities, but with a lower level of protection; and dual-wield swords solely protecting you from enemy assaults.

As the gamers state, this title has a good entertaining aspect, cheesy cutscenes, weird dialogues, rich sound effects, and over-the-top action... but only for a few hours. After that, you'll notice more and more Samurai Western drawbacks. However, the idea of making the Wild West more oriental is praiseworthy.

Released in 1997, this western-genre game requires a sequel or a remaster. At least, most of the people who tried it, insist on this. And for a good reason! It was the first of a kind game with a sniper zoom, and the first to feature a gun reloading mechanics. Outlaws can be named as one of the early first-person shooters of its time. Besides, it was provided with the Star Wars: Dark Forces engine to gain the best shooter controls.

Our protagonist, the former U.S. Marshall James Anderson, will take the law into his own hands after his wife is killed and the daughter is kidnapped by the outlaws. When the quiet family life is disrupted in such a cruel way the only solution is vengeance.

So our hero will take his gunfire in hands and go in search of justice in the town of Sanctuary. With immaculately designed characters with distinct personalities, in-built puzzles, the first-person Gun Slinging Action, and all the advantages named below, Outlaws proves to be a decent western. It is still available to get and play. So why don’t you just try to complete Marshall Anderson’s mission?

Red Dead Redemption 2 promises to be a trustworthy title in the row of modern westerns. This game is not released yet, and the date of the premiere expected is 26th of October, 2018.

As it is clear from the name, this title is a game sequel, and a big relief for all the fans long lasted for a continuation. Three game trailers are available at the moment, and they shed some light at RDR2.

From the videos, we can see an increased range of drawing, higher resolution of textures and improved particle effects. The wildlife pictures demonstrate not only the detailed nature but the artificial intelligence of animals too. We should also mention a high-class facial animation of the characters; it brings the spirit of cinematography to the game.

Besides, the developers from Rockstar clarified everything a bit and revealed some details of the forthcoming blockbuster. The interface is going to be extremely minimalistic with no excess details on the screen. Though the graphics are meant to strike with its accuracy and realism. Even the character’s beard will grow, and the clothes will get dirty, the developers confirm.

It remains only to wait for this western action-adventure and pray that our expectations will be entirely justified.

Westerns can be considered a kind of a time-machine that will take you to the old American West. By playing one of the following games or even some of them, you will find yourself a cowboy on his specific mission.