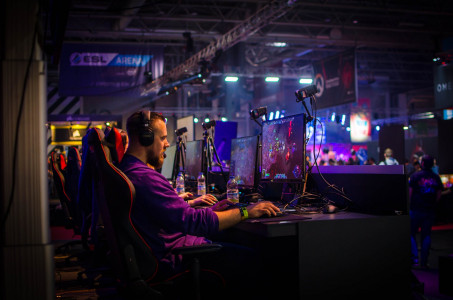 Steam may be the biggest fish in the ocean of PC gaming, but today’s ever-splashing fountain of competition will make even the sole dominant power player nervous. These days, the tide may be turning towards certain epic alternative stores. Epic Games, an American video game and software development company, is famous for creating the Unreal, Gears of War and Infinity Blade video game series, and most currently, the immensely triumphant battle royale game Fortnite and Apex Legends. In December 2018, Epic Games started its own online video game marketplace calling it Epic Games Store. The major distinction here caters to game developers, not players.

Valve Corporation (the developer of Steam) usually pockets a 30% cut from game revenue sharing with developers the other 70%. While the Epic Games Store is now offering developers a much more exciting 88% share leaving itself only a 12% cut. The perks don’t end there. If you utilize the Unreal Engine for video game creation, Epic will take 5% commission. But if you release and promote the gaming product on the Epic Games Store, then that 5% cut comes out of the 12%. Working with Steam on the same issue would have you lose 30%.

See below to get the visual idea of just how attractive the Epic Games Store revenue split is for game developers. 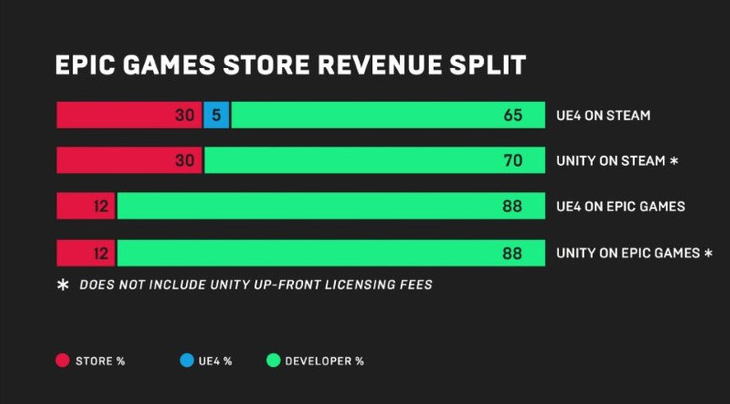 In an interview with GameInformer, Tim Sweeney, co-founder, and CEO of Epic Games, says that their goal is to offer developers a better deal adding that even at 12% cut the Epic Game Store will gain significant profit. Today, a lot of bloggers and opinion leaders within the PC gaming marketplace eagerly promote Epic Games Store expecting to be rewarded through a referral program. Chances are high that a lot of game developers will replace the Steam affiliate links with those of Epic Games Store.

Steam, established in 2003, has been the major go-to market for PC video games for more than ten years. Since it first started selling third-party developers’ games in 2005, it has literally had no rivals in its segment. Not until Epic stormed the business aggressively eroding Steam’s dominance. In early February 2019, Deep Silver, a video game publisher from the United Kingdom, repositioned its about-to-be-released game Metro: Exodus from the Steam platform exclusively to the Epic Games Store.

Epic is a multi-billion-dollar company that has generated immense profits from their game Fortnite and is now battling Steam for dominance on the downloadable PC video games distribution market. The excruciatingly severe reality of capitalism has long been dormant on the digital gaming marketplace scene. It’s wide awake now, skyrocketing ruthless competition on the market representing a true Clash of Titans of the modern success-driven world.

A strong rival of Stream should in theory appeal to gamers who are now being spoiled with exclusive games, lower prices and even occasional freebies by Epic. However, Steam has been optimising its platform with multiple features and equally generous benefits throughout the years, while Epic Games Store is a very young platform created with solely four features: view a game, purchase, download and play it. Most gamers don’t enjoy being forced to use Epic Games Store which is so far inferior feature-wise. They’re not fond of Epic’s bully-like approach and get irritated about its aggressive exclusivity ambitions. In fact, a lot of players now view Steam’s competition as a threat to their favorite activity and long-term gaming habits.

Let’s take a look at the extensive list of major features Steam has been offering its users for years:

As of today, Epic Games Store can flaunt only the Friends list, online gaming and chat features from the selection above. The other functions are currently unavailable on Epic Games Store, which bothers a lot of gamers who are being not-so-gently pushed towards using Epic instead of Steam.

Despite the lack of features and the trust issue currently existing between the newly launched Epic Games Store and the gamers, Metro: Exodus sold 2.5 times as much as its previous version, Metro: Last Light did on Steam. As you can see, gamers’ actions speak louder than their words actively demonstrating their ever-lingering itch to switch from Steam to Epic. In the long run, one thing is crystal clear: as of today, Epic Games Store is going full steam ahead.

It is also obvious that Steam is far from going down without a proper fight. Currently, Steam boasts 90 million monthly users. The company intends to offer developers plum deals, promote its services much more actively and even cover the market in China in the near future. However it pans out, Epic Games Store has positioned itself as a powerful player on the PC gaming scene. There’s no doubt that 2019 is going to be an exciting year for the PC gaming marketplace.

Who do you think will win this game of thrones? Join the discussion below to share your thoughts on the Epic vs. Steam battle! Alternatively, check out our extensive list of the hottest games of 2019!