PS4 Pro Vs. PS4 Graphics Comparison for a Range of Games 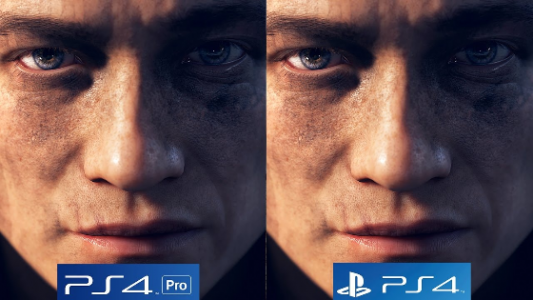 The PS console has undergone tremendous growth from its inception as PS1. The latest version of the console, PS4, is a worthy competitor in the modern console market. And the upside of this development is the benefit of choice offered by Sony. There are two versions of the game console available, namely PS4 and PS4 Pro that both offer something for everyone.

Codenamed PlayStation Neo prior to its release, PlayStation 4 Pro uses 4K resolution to run games while employing HDR to improve the visuals of the conventional console games. Such innovation has made the intriguing battle of PS4 vs. PS4 Pro even more interesting.

The Patch 1.02 has been brought to Horizon Zero Dawn which delivers several updates and changes. PS4 Pro owners are free to pick two rendering models, and users can favor resolution or performance. When you enable its Favor Performance mode, the resolution caps at 1080p. However, instead of allowing the frame rate to run as fast as possible, Horizon Zero Dawn opts to employ the GPU power to lock the 30 FPS target more closely instead.

The comparison video for the two game versions.

Looking back at the reveal of PS4 Pro during the PlayStation Meeting held last September, we were guaranteed a system that comes with enhanced graphics, 4K resolution, and higher performance. PS4 Pro produces images that are slightly clearer than those of PS4, and the colors on the latter are a bit lacking compared to the high-end version of itself. PS4 Pro also seems to have better shadows and lighting.

Even before the release of PS4 Pro, gaming enthusiasts had already begun making graphics comparison videos. Uncharted 4 is one of the games with the best graphics in this generation. It combines beautiful environments with a complete physical-based rendering pipeline and excellent animation.

The comparison video for the PS4 and PS4 Pro versions.

The PS4 Pro version of the game cannot run at 60 FPS and is instead capped at 30, and opts for a 1440p image as opposed to the 1080p image of the original PS4. With this in mind, it would have been preferable to have a 60 FPS buff of the PS4 version run at 1080p even if it can’t fit the 4K or 1440p category. Unfortunately, that is not an option.

Rise of the Tomb Raider

One third-party title that stood out as a potential impressive showcase of the prowess of the PS4 Pro was Rise of the Tomb Raider from Crystal Dynamics. Once announced, it featured a number of improvements for PS4 Pro owners. The new update comes with three different modes to choose from – 4K at 30 FPS, 1080p at 60 FPS and 1080p at 30 FPS with improved graphics.

You can view the comparison video here:

The most significant difference is the glaring limitation in the PS4 Pro hardware as its GPU cannot handle native 3840x2160 UHD resolution. Another difference is that the new Pro version lacks a significant amount of additional memory. Rise of the Tomb Raider on PS4 was impressive, and PS4 Pro pushes the envelope a tad further, giving it a slight edge over PS4. This new version is worth checking out.

For Honor brought with it plenty of advancements in critical graphics technology. The game was characterized by increased crowd density, global illumination, and complex dynamic lighting support. It also has a complete physical based rendering pipeline which makes it one of the games with the best appearance in the console cycle.

Where does this game stand in terms of graphics on PS4 Pro compared to the PS4 version? On the PS4, the game runs at a complete 1920x1080 resolution while users of the Pro can enjoy a 2560x1440 resolution, which is crisper. However, the difference seems minuscule to the naked eye, so the overall improvement is questionable.

Final Fantasy XV has sold in almost every corner of the world due to the dozens of difficult decisions by Square Enix over the last decade. The PS4 version has the majority of players at 40 million.

The PS4 Pro version features Lite (at 1080p/60FPS) and High (at 4K/30 FPS) performance modes, as demonstrated in this comparison video.

In practice, it results in an inconsistent performance in both modes. When switched to the Lite mode, the FPS rarely goes up all the way up to 60, and the High mode struggles to maintain 30 FPS consistently.

As it stands, PS4 Pro is more of a console with bells and whistles rather than a substantial upgrade from PS4. Being the focal point of Pro’s marketing campaign, PS4 Pro graphics fall short of expectations set upon them. The hardware isn’t quite capable of delivering a substantial graphics improvement across all PS4 titles. While you can easily see why it falls under the bang for the buck category for 4K TV owners, the price tag seems unjustifiable to the average gamer.

The upside of this competition is that you have the freedom to choose the model that fits you best. If you feel like you need the extra juice to get the most out of your gaming experience, then PS4 Pro is the way to go. However, if you are just looking for a solid performance with no fancy toppings, then there is no reason for you to get a PS4 Pro. PS4 is perfectly capable of handling current-gen games for years to come.