Sponsored links
GamesMojo is not an official representative or the developer of this game. Copyrighted materials belong to their respective owners. Warning: Users can download the game from the links of Official Website and legal sources offered in the following articles.
Sponsored links

Our writers work hard to make comprehensive reviews of the games you love. The rules are 15 hours of gameplay, no less, knowledge of all modes and plot of the game, experience in gaming and writing.
View all reviews
Professional Review

Death Stranding is one of the craziest adventures created by Hideo Kojima, the author of Metal Gear Solid or Castlevania. This time it takes you to the strange world where even time flows like water, and the civilization is split into cities shrinking before death’s face. Download Death Stranding for PS4 and follow the story of the transporter that faces the mysteries! 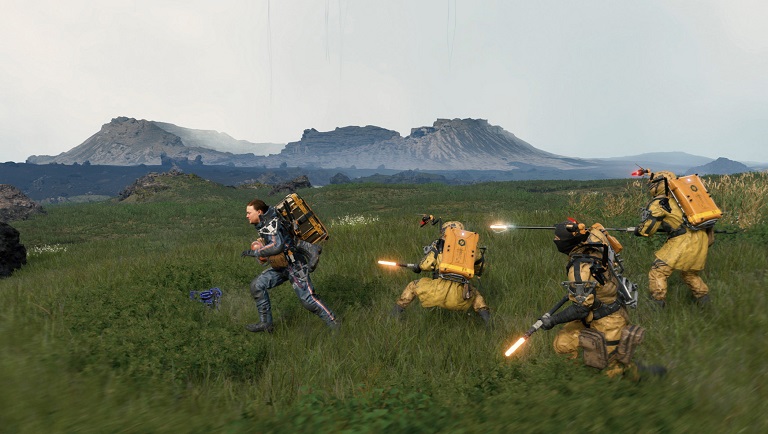 Like most of Kojima’s projects, Death Stranding looks fantastic. The characters have been motion-captured from famous actors, including Norman Reedus, Mads Mikkelsen, Léa Seydoux, Guillermo del Toro, Sarah Margaret Qualley, and others. The overall quality is nearly cinematic, with long cutscenes; and the third person perspective lets you see your characters in action. As for effects in fantastic scenes, they make you wonder how this all could be invented and transferred.

The story of the future after The Death Stranding shows mankind crushed and split. People live in divided cities, so-called Knots, with desert and death between them, strange explosions still remembered, and unseen beasts lurking around. There are even Timefalls - anomaly zones where time runs extremely fast, falling like the rain and making everything grow old in a blink.

If the time is out of joint, then Sam, the protagonist, was born to set it right. He reconnects the knots to the network that’s been destroyed after a strong attack. The story is complicated with some personal motives: the President of the United Cities of America sends Sam to follow her daughter lost in one of the knots. Isolated citied have always been Kojima’s interest, and this time he gets the most out of this idea.

In order to reconnect the cities, you need to survive through the desert, and that’s what most of the game is about. Deliver goods, avoid anomalies (but explore them), contact the locals living around, and care about your equipment. And don’t forget to use the diverse technologies of the future.

There will be probably something to learn when it comes to specific missions. But the game has been developed exclusively for PlayStation 4, so it’s all bound to DualShocks. If you know how to move your character, turn the camera around, interact with items and so on, by other games, you will feel more familiar with Death Stranding.

The game features open world with various anomalies, Timefalls being just one sort of them. There are quests you can take, both side ones and those impacting the main mission. Though the developers didn’t offer a fully-fledged multiplayer, replacing it with sporadic inter-player contacts, they also contribute to the unpredictability of the process. This one is here for long. And, given that many interesting projects will await PS5 release, there will be fewer alternatives to this level.

If you like quality sci-fi games with unusual setting and detailed narrative, and a little madness, Death Stranding is the option. It’s released long before PS5 is out, so probably it will be updated much later. Even on PS4, it looks fantastic, though. It will take you long to go through, and even longer to explore the world beyond the core mission.

Only released for PS4;
The game may seem too twisted.

Besides, the game you're reading right now:
More on Disclamer Page

There's not a lot of questions about DEATH STRANDING. Ask insistently in the comments so you can make it frequent! Yup,take me to comments

All content is authentic, protected by copyright and owned by GamesMojo. Content may not be copied, distributed or reprinted without the prior express written permission of GamesMojo.com.

We collect all legal sources for every game. To get this game you should go through the link below.
Get it
To download the game, you will get links to the Official Website and/or official digital markets.